Madonna dedicated a song to Malala 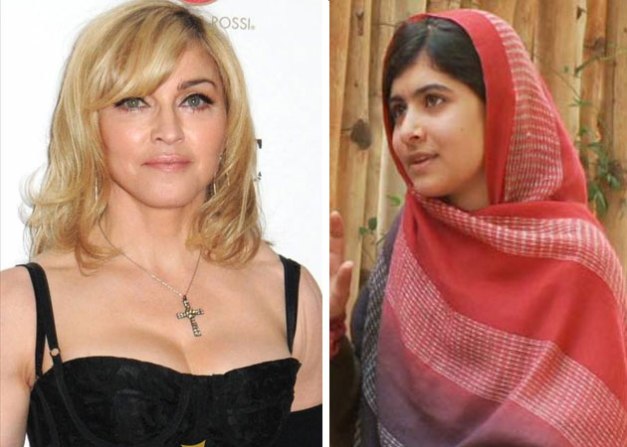 At a recent concert, pop queen Madonna dedicated a song to 14-year-old Malala Yousufzai, the Pakistani girl shot by the Taliban.

The Material Girl was performing at the Staples Center in Los Angeles as part of her MDNA tour when she gave an onstage shout-out to the young education-activist who was shot on her way home from school in Mingora, Pakistan, last week.

“The 14-year-old Pakistani girl who was shot on a school bus for writing a blog… who wrote a blog about how important education was to her. The Taliban stopped her bus and shot her… Do you understand the sickness and absurdity of this?”

“This song is for Malala,” Madonna, before launching into a performance of her hit song, Human Nature.
“Support education! Support the people who support women!” Madonna went on to shout to the appreciative crowd Wednesday.

Malala Yousufzai drew the ire of the Taliban for defending her right to an education. The outspoken teen had carried out her campaign since the age of 11 through an online diary she wrote for the BBC.

To emphasize her point later in the show, the Vogue hitmaker rolled down her trousers to reveal the word “Malala” scrawled across the small of her back, said The Hollywood Reporter. Hollywood stars like Jessica Alba, Heidi Klum and Neil Patrick Harris were in attendance at the show.

2 comments on “Madonna dedicated a song to Malala”